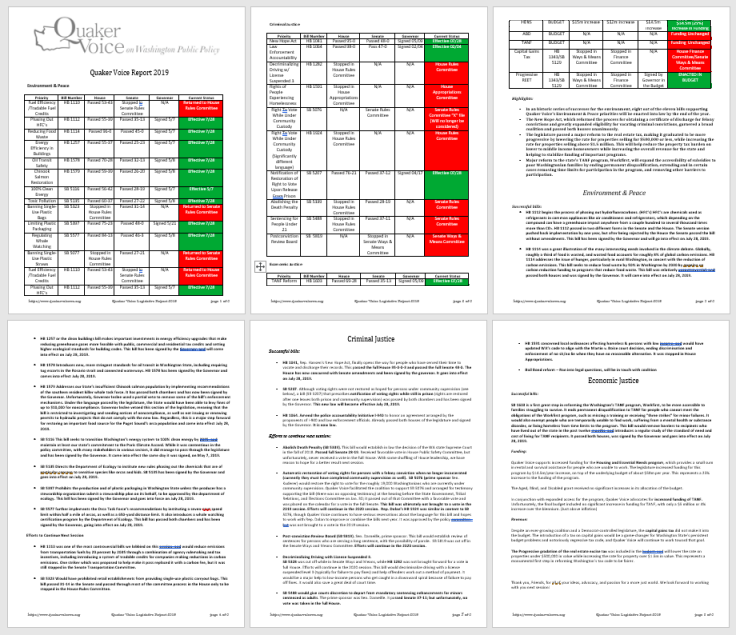 Download this report in PDF format here to have it with the grid as shown in the image above.

Efforts to Continue Next Session

Efforts to continue next session:

SB 1603 is a first great step in reforming the Washington’s TANF program, Workfirst, to be more accessible to families struggling to survive. It ends permanent disqualification to TANF for people who cannot meet the obligations of the Workfirst program, such as missing a training or receiving “three strikes” for minor failures. It would also exempt people who are temporarily unable to find work, suffering from a mental health or substance disorder, or living homeless from time limits to the program. This bill would remove barriers to recipients who have lived out of the state in the past twelve months, and introduces a regular study of the standard of need and cost of living for TANF recipients. It passed both houses, was signed by the Governor and goes into effect on July 28, 2019.

Quaker Voice supports increased funding for the Housing and Essential Needs program, which provides a small sum in rental and survival assistance for people who are unable to work. The legislature increased funding for this program by $14.5m/year increase, on top of the underlying budget of about $58m per year. This represents a 25% increase to the funding of the program.

The Aged, Blind, and Disabled grant received no significant increases in its allocation of the budget.

In conjunction with expanded access for the program, Quaker Voice advocates for increased funding of TANF. Unfortunately, the final budget included no significant increase in funding for TANF, with only a $5 million or 4% increase over the biennium. (Just above inflation)

Despite an ever-growing coalition and a Democrat-controlled legislature, the capital gains tax did not make it into the budget. The introduction of a tax on capital gains would be a game-changer for Washington State’s persistent budget problems and notoriously regressive tax code, and Quaker Voice will continue to work toward that goal.

The Progressive gradation of the real estate excise tax was included in the budget, and will lower the rate on properties under $500,000 in value while increasing the rate for property over $1.5m in value. This represents a monumental first step in reforming Washington’s tax code to be fairer.

Thank you, Friends, for all of your ideas, advocacy, and passion for a more just world. We look forward to working with you next session!

Bringing the Quaker voice, guided by testimonies and spiritual devotion, to the formation of public policy in Washington state.

Sign up here to receive emails from us, or to change your contact information our Action Network database.